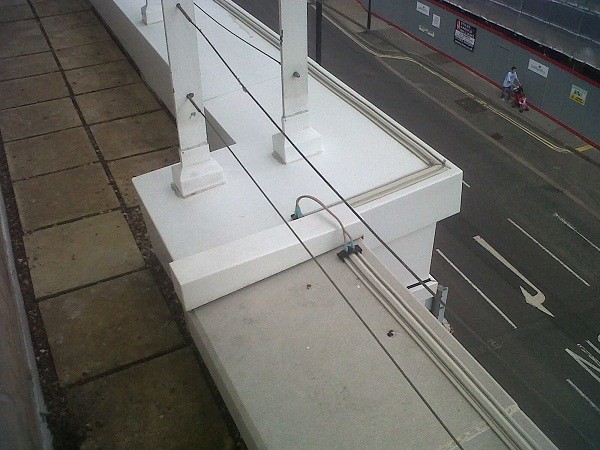 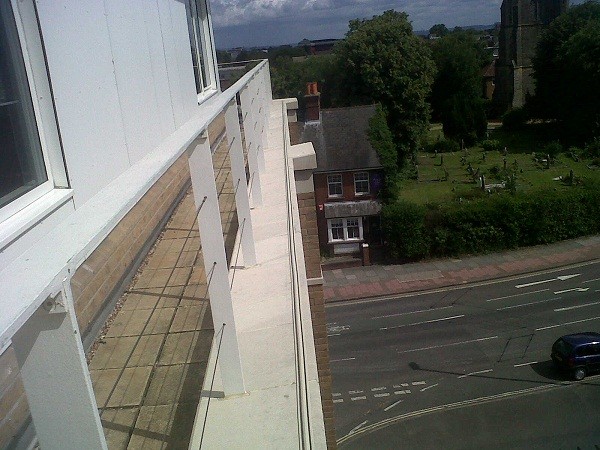 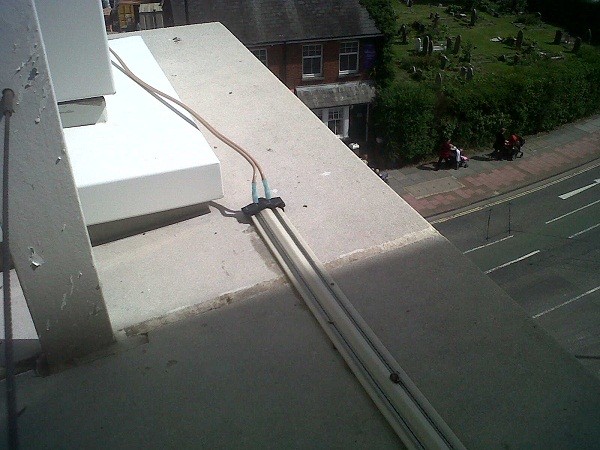 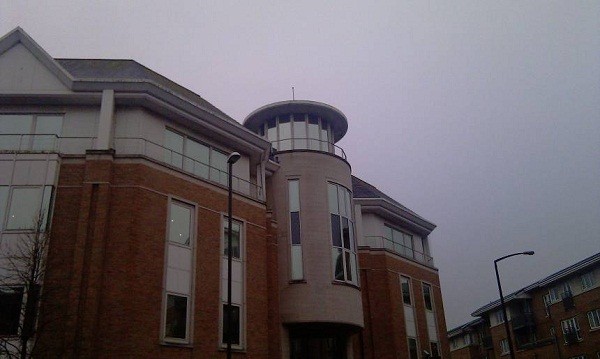 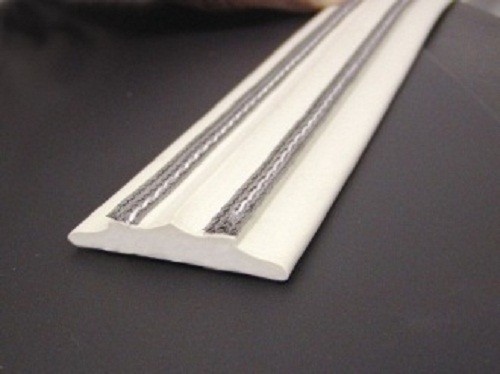 Along with the local surrounding buildings, this office block had been suffering extensively from pigeons and their associated fouling for several years. Eco Environmental were asked to come up with a bird control package to rid or deter the pigeons. The front elevation 3rd floor communal balcony shown in the pictures, measuring approximately 100m long, already had anti bird netting fitted to approximately half of the opening. This was effective in deterring the birds from this area, however, in the section of the balcony unprotected by the bird nets, feral pigeons would roost and nest in considerable numbers. This had resulted in heavy fouling building up along the complete length of this open section of balcony over 50m long!!

We advised the client that the most effective method of deterrent in this location was to install our anti bird net system between the front of the parapet wall and the soffit for the entire length of the balcony, in order to prevent further pigeon ingress. Thereafter we would remove the fouling.

The client however was not keen to install more bird netting in front of the windows for aesthetic reasons and asked us to consider other options. Our surveyor has had considerable experience and good results from the new AVISHOCK™ electrostatic track system in several different scenarios.

Eco Environmental offered this electric bird deterrent option to the client but we were not able to guarantee how effective it could be in protecting this deep and wide balcony area as birds could theoretically bypass the system with ease, flying over the front electrostatic strip and roost further back along the sheltered balcony. The client understood the potential for failure but was willing to trial the installation in any event in order to meet their requirements of an "invisible” system.

Due to the program of works and to fit in with the external building clean, the pigeon deterrent was installed at the start of the contract. We installed one row of AVISHOCK™ only to the leading edge of the parapet wall to the third floor. A lead out wire was taken through the building under the raised flooring and installed to the charger unit inside the riser cupboard. At the same time fouling was removed from the balcony and the areas were pressure washed down.

The results have been somewhat staggering! With the exception of a few blobs of fouling initially on the balcony, there has to date been no occurrence of feral pigeons re-roosting in this balcony area. Not only that, they also appear to have moved away from the building as a whole. Considering that Pigeons could easily pass by the leading ledge of the wall and fly straight into the balcony from several angles we are particularly surprised in how effective this product is.

We will have no hesitation in suggesting and specifying this discreet bird deterrent system on future contracts where traditional, more visual bird deterrent systems such as Bird Netting and Bird Wire are not suitable. We imagine that it will be particularly popular among architects and designers as it is invisible from ground level.